I’d like to talk about my experience attending the Summit virtually for the first time. It was spectacular! There was so much more to this experience than I could have imagined.

People were engaged, friendly, and helpful. 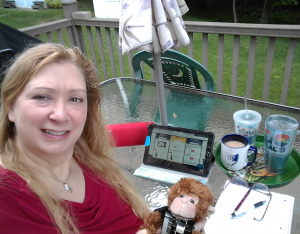 There were so many great sessions (perhaps even more than usual), that it was difficult to find just one to attend. But the great part about attending in person? If you attended a session that didn’t quite pan out the way you’d imagined, you could click off and immediately pop into another session. No more sitting there to be polite or slinking off apologetically.

Also, you could go back and watch the sessions you missed, almost immediately. Most sessions premiered at a certain time, but then the recordings became available soon after. Or you could re-watch your favorite sessions!

Another great part about attending virtually was being able to sit outside on the deck with my cup of coffee, enjoying the beautiful weather and nature, while paying attention to a session. No sitting like sardines in a crowded ballroom, on uncomfortable chairs, trying not to elbow your neighbor as you reach for your cup of coffee. You could spread out as much as you wished. And attending outdoors, I didn’t have any distractions like the phone or other computer screens. I was able to really be present and pay attention. It was fabulous!

We got to enjoy a really entertaining and interactive magic show, where Ohio STC member Lisa Scovern’s son, Nathan, played a starring role.

We even had a trivia session that was STC and tech comm themed! That was great fun! It was even more fun watching the wrong answers being put into the chat than the real answers! ProSpring founder, Jack Molisani, and his team sponsored and produced the event. He even awarded LavaCon conference registrations as prizes! (I accepted one of those, and look forward to the Virtual LavaCon from October 24-27, 2021!).

Some of the sessions were “semi-live” which meant that they were recorded ahead of time, but they still premiered at the scheduled session time. This was done to accommodate the speakers who might have been in far-off time zones, and it allowed others to present the material more smoothly. Regardless, the presenters were live in chat during the session, and they answered questions as the topics were revealed.

Other sessions were presented live through Zoom, as a regular meeting.

The platform on which the Summit was held was really neat! You enter through a main room, and you could visit the Expo Hall (I happened to be part of one of the Exhibitor booths; our Toastmasters District 10 sponsored a booth). You could visit the Lounge to chat, and see who was online. You could tag a person to chat, to have a phone or video chat, or leave them a message. That was much easier than trying to track someone down in a huge venue! All of the sessions had links from the conference platform, so you didn’t have to track down any links. You could also reach out and hang out with the conference organizers, which was a nice touch.

The honors event, while nice, missed a little bit of the audience applause and kudos you would receive through an in-person event. But a really nice feature in the virtual environment was the STC talent show, were many members showcased their various talents through their own video productions (me included)!

I did get to connect with many of my STC friends whom I haven’t seen in a couple of years. Even though it was through chats, the conversations still held the warmth and meaning of being in-person.

I missed the lunches, dinners, and chance meetings in the halls. I missed being able to travel elsewhere and leave my work and home worries behind.

But I did not miss the overwhelm, the exhaustion, nor the escapes back to my room that I usually experience at an in-person conference.

The quality and selection of sessions was spectacular. The days flew by so fast, I could hardly believe the days were ending. By the end of Wednesday, I really could not believe that the Summit was over!

My favorite sessions were ones by Mike Parkinson of Billion Dollar Graphics, a highly energetic performer, who showed us how to wow with PowerPoint presentations. I also really enjoyed a session about Learning Paths, where the speakers gave me ideas to present a variety of resources visually and make it more appealing to users.

The STC Virtual Summit 2021 was a fabulous experience, one that I’d highly recommend.

Be sure to sign up for next year! You can attend in Chicago or online!