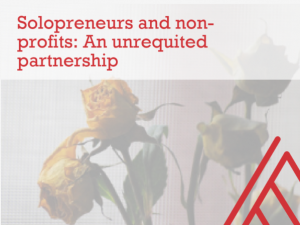 George Mount led an NEO STC virtual session – Developing Effective Data Analytics Programs – based on him developing “instructional content on data for over five years now, spanning all media and topics” as he states at his blog at https://georgejmount.com/blog/.

Many of us could find a visit to his blog of value as George covers impressive and  interesting topics. He writes, for example, about how PhD dropouts can be good consultants, Excel tips and tricks, the R and Python free and open source programming languages, and what it is like to be self-employed in his field of data analytics.

When writing about self employment, George mentions the gig economy and how non-profits and solopreneurs can be a great match. As an example, consider the ideas that George brings up in the following:

It can be incredibly hard at the to make a name for oneself as a solopreneur, but non-profits have some of the strongest brand equity of any organization. This work can be a huge authority boost for solopreneurs, who can then tell clients about the non-profits they’ve successfully worked with, and display the non-profit’s veritable logos and testimonials on their website.” “…To a solopreneur, publicity is as valid a form of compensation as a paycheck — which is a perfect arrangement for non-profits.

Non-profits are famously strapped for cash. I’m sure there are many professionals who would love to contribute their talents to an organization professionally, but find the opportunity cost of a low-paying full-time job just too high.

Solopreneurs are also famously strapped for cash, but have the benefit of time flexibility. They have the time to develop other sources of revenue, but could often use a small, recurring paycheck for when they’re in a transition period.

Non-profits can show the private sector how to work with solopreneurs. In theory, a non-profit should take on projects that are not profitable in the private sector. Unfortunately, bold innovations often aren’t immediately rewarded by profits, and can take years to accrue. Because profitability is not its primary metric, a non-profit is able to stand on the horizon of what could be normal business operations a few years later.

Non-profits have the chance to provide a model of “playing nice” with independent contractors. It’s not a steady relationship at the moment, and many are concerned that solo employment will be just one more way for corporations to step on individuals. I would like to believe that solo employment can build healthier relationships with an employer, and ultimately a healthier society. Validate that, non-profits!

Can non-profits think different?The fact is that non-profits should be positively re-inventing a status quo that we just take for granted as a society, and have the status to do so. Unfortunately, they often remain the most hidebound in their business practices. It’s understandable — they don’t have money to blow, and they are obligated to donors and benefactors to be responsible stewards.

From what I have seen, non-profits are designing their part-time and freelance positions to fit the traditional social narrative that the only people who would want them are either young parents or retired. As I said, while it’s awesome to include these groups, who often have difficulties fitting into the corporate world, there are more personae to be aware of.

What I would hope as an independent contractor myself is to see the essential role that non-profits could play in our world, and vice versa. “I’ll trade you high-end labor for some publicity and brand equity at a fraction of a full-time salary” sounds compelling to me.”