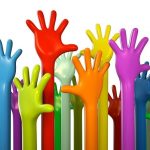 Not quite ready for a leadership role? We have plenty of other Volunteer Opportunities, where you can learn the ins and outs of running a successful chapter.