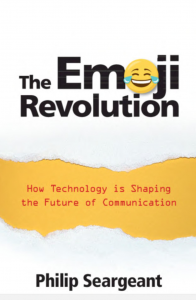 How much fun can it be to read a book about emoji? I wanted to find out when I picked The Emoji Revolution to read and review. I was not disappointed as what I found in The Emoji Revolution met my expectations. There is an element of fun and lightness throughout the narrative. However, the overall treatment of the topic is serious and scholarly, so I found a mix of serious and fun and a bit of the best of both worlds.

Can author Philip Seargeant really convince us that emoji are “in the front line of a revolution in the way we communicate” and communicating with emoji provides an example of “ingenuity and creativity in the heart of human interaction” (as stated on the back cover of The Emoji Revolution)? The answer in my view would be more or less “yes” as emoji let us communicate far and wide with graphics as well as the written word though, of course, what we communicate with emoji is limited. In addition, emoji are indeed ingenious and creative as well as being fun and helpful. I keep thinking of the idea that a picture can be worth a thousand words. And, ok, now I could add an emoji to show you how I feel about what I just said.

One of the many topics Seargeant covers in The Emoji Revolution includes addressing the question of creativity and language. He states, for example, that “language is one of the most salient ways in which we can express our creativity” (p. 152). He tackles the topic of creativity by explaining various definitions for the term “creativity” and explains how emoji add a creative element to expressing ourselves in written language.

Seargeant argues that the use of emoji on the phones or other devices we use so much shows us how technology is becoming part of our everyday lives.  But are these emoji “ushering in a new era of empathy and emotional engagement on the internet” (again as stated on the somewhat “sensationalistic” back cover of The Emoji Revolution)? That may be a stretch, but then again, we can always hope.

The Emoji Revolution: How Technology Is Shaping the Future of Communication

Note to readers:  A version of this review is scheduled to appear in Technical Communication, the journal of the STC.