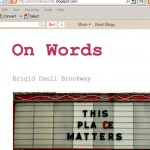 From Jules Verne’s moon landing in From Earth to the Moon, to the water beds that Robert Heinlein predicted in Beyond This Horizon, sci-fi writers have predicted the future in some eerily accurate ways. So when our tech caught up with their imaginations, many sci-fi authors had conveniently already come up with the words for our devices.

Here are a few, from Vivian Cook’s In a Word as well as this article on Whizzpast.com: